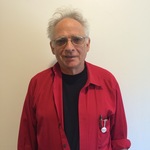 "The art scene on campus was really sort of remarkable actually."

Arthur Hughes, '67, looks back on his time at Bard in the 60s, a time when the nation was locked in the Cold War and when students were protesting U.S. involvement in the Vietnam War. He shares stories about his personal ties to the war and the draft, the people who made Bard a hub of artistic expression, his work as a biology student and, then later, as an art major.

He tells a story about Rikki Ducornet, her tarot cards, and Louis Schanker’s critique of them during her senior review. He also recalls Bob Dylan's visits to Adolph’s and his impromptu Bard College concerts at Sottery Hall and Ward Manor.