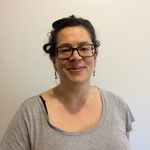 Annie Gilson, '86 reflects on how Bard expanded her horizons. She wasn’t a ‘great student’ in high school, and she remembers her father telling her she was going to be a secretary. Bard was one of three schools (along with Swarthmore and Middlebury) recommended by her grandmother. She chose Bard, studying poetry and creative writing with Robert Kelly, Clark Rodewald, Terry Dewsnap, Nancy Leonard, Mark Lambert and Peter Sourian. When reminiscing about Bard, she notes, “There’s an aura about the place … there’s a feeling of possibility here.” She goes on to say “Life is hard... if you don’t let yourself feel enchanted … you have to see the magic.” After college, and various travels, she became a fiction writer and professor at Oakland University in Michigan. She credits Bard with giving her the ability to create an expansive future for her students. At Oakland, she started an internship program; an alumni/ae mentoring program; a zoo program; a prison program; and a community center/ children’s teaching program.