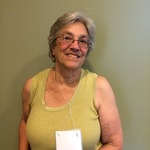 "Well, I remember Bob Dylan coming up a couple of weekends and trying to hit on the young ladies here...also we had...Reverend Gary Davis...I remember going to a concert next to Doc Watson; he was blind and he said 'will you please hold my guitar for me?' And I was so thrilled."

Ellen Rogovin Hart, '66, reflects on the political atmosphere at Bard and off-campus (including her father being declared a communist by the House Un-American Activities Committee) in the sixties. She also touches on the reasons she decided to attend Bard College and the folk music scene around Bard's campus.