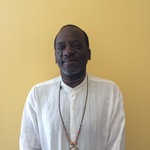 "We are ... what I lovingly refer to as 'Nat's Children.' Natalie [Lunn] was a wonderful person."

Michael Bell, ''82, recalls his experience as a student of color at Bard in the 80s, stating that it was a much more forward-thinking place than one would expect of a college at the time. He also shares stories about his classmates' reactions to discrimination against him by others, about his career after Bard, and about Natalie Lunn, a professor who inspired him and his fellow alumnae/i to establish a scholarship in her name for tech-focused theater majors.