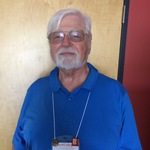 "So I had this wonderful true liberal arts education that went beyond organic chemistry and physical chemistry and calculus and all of that stuff."

Emanuel "Manny" Wolff, '56, remembers his time at Bard fondly. A German Jewish refugee born in 1937, he escaped from Nazi Germany with his family. Wolff’s father was a Roosevelt Democrat, and Manny found Bard a “bastion of liberal thinking and principle.” He remembers Pete Seeger playing at Bard in 1954 during the McCarthy era, while Seeger was blacklisted at other schools. Wolff notes Dr. Ted Sottery’s lasting impact in his life, and describes Dr. Sottery as a man of “remarkable integrity and humility” and an “expert in his field.” (physical chemistry). He recalls that Sottery’s answers were given in the form of a question, ”I think it means the following…”

Wolff remembers President James Case with a personal anecdote. A ‘Beer Dance’ at Bard was a common event that lasted into the 1970s. Wolff was entertainment chairman one year and thought spending money on beer and a band was a waste. For one weekend, he spent it instead on gin and tonic, and called the event the F. Scott Fitzerald weekend. The next day was Parents’ Day, and the campus was littered with gin bottles. When Case saw him he punched him in the gut, half playfully saying, “How could you do this to me?!” He also remembered that Case’s daughters were sent to Vassar..not Bard, and mentioned that President Case was given a vote of no confidence at Bard in 1959.

Wolff worked during his years at Bard in various jobs including lifeguard [at the Blithewood pool] and waiter at the refectory in Preston Hall. He studied as a pre-med student, but also studied classical organ with Clair Leonard, and enjoyed other arts classes. Manny received three years of PE credit for taking one dance class with Jean Erdman, wife of Joseph Campbell. They were putting on a production that required partnered lifts, and there were not many men in the dance department. This experience served to give him an appreciation for dance that has lasted through his life.

After Bard, Wolff enlisted in the Air Force to avoid being drafted. Here he became a de facto psychiatrist, where he ‘liked listening to people's stories’ while figuring out who might “crack up.” He went to medical school after this experience and became a psychoanalyst.

Wolff ended with a story from that morning’s memorial service in the chapel: the chaplain couldn’t unlock the cabinet that held the chalice for the Holy Eucharist, so Leon loaned some Kiddush cups which they were “perfectly happy to use… That little vignette typifies Bard.”