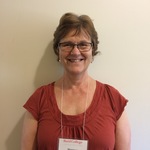 "I think they [her professors] had faith in me that I didn't really have."

"Bard was my 5th college," explains Maureen Osborne, class of '76, as she reflects on the steps that led her to Bard. Originally from Gary, Indiana, Osborne describes herself as a ‘child of the 60s,’ who traveled around the country taking classes at various colleges before making her way to Bard as an older student. She further discusses her parents; her psychology professors, who expected great things from her; how the energy and culture of Bard opened her up to a side of life she had never experienced before; and how Bard put her on the path to become a clinical psychologist specializing in transgender issues.