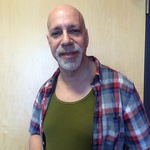 "I remember standing in the ruins [of the Coach House Theater] in this self important way, saying 'the establishment has burned down, but we shall continue; our theater can exist in the ashes. We need no theater to present our drama!"

David Schechter of the class of '76 shares his experience as an anti-establishment Bard theater major. He entered at age 16 through the early admissions program. He remembers the loss of the Coach House Theater, and the response of the theater students. He talks about his acting troupe and the unique opportunities for furthering his art he found at Bard, as well as how Bard helped him establish his career by introducing him to the people he would work with for many years and by giving him the opportunity to work on several cross-disciplinary, incredibly unique projects that influenced his work after college.